The Rigel Line (Chinese: 里格爾綫) is a rapid transit operated by Rigel Corp.

The route has a total of 11 Stations, split into 3 phases.

In Railway Development Strategy report 2004, a new line was settled and was split into 2 phases.

The phase 2 section is intended to compete with KCR Joestu Line City Section, running from Fuka to Fustersa.

In April 2004, 10 sets of 4 car trains are ordered by Rigel Corp and will be constructed by CAF.

In February 2005, the tunnel and station constructions for Phase 1 has begin which consisted of 3 stations with a total of 1534m long.

By August 2005, all tunnel and station constructions has completed, and began the installation of electricity, air conditioning and signaling system.

In January to April 2006, various tests has been performed to ensure stability and reliability.

In April 2011, 2 CAF Train experienced a loss of traction power after departing from Auriga Station and Odysseus Station respectively.

Following the examination of the train, cracks were discovered on parts of the underframe component on 5 other trains.

The affected CAF Train is taken out of service and retired shortly after.

As of 2022, there are 5 CAF Trains remaining on the line and 21 sets of K-Train. The remaining CAF Trains will be slowly taken out of service and eventually replaced by K-Trains and the new S-Trains.

6 Cars Platform were reserved on all stations since the opening of the Rigel Line.

As passenger demands rise, the first 6-Cars trains is put on services in August 2013. 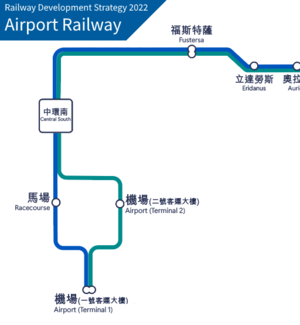 The Airport Railway section of RDS 2022

In Railway Development Strategy report 2022, under the new airport terminal plan, route alignment on the Rigel Line will be adjusted, which means Rigel Line will get another expansion (i.e. Phase 3) after 14 years. Under the new proposal, Rigel Line will stop at Central South and Racecourse, and terminating at the Airport (Terminal 1).

Starting from March 2022, Rigel Line is fully suspended due to replacing current signaling system and performing various works on current stations. As of July 2022, there are no any new information provided by Rigel Corp for the progress. 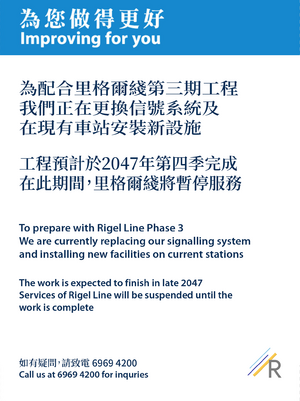 Suspension notice of Rigel Line's service due to Phase 3 expansion