The Tohoku Shinkansen (Chinese: 東北新幹線) is a High Speed Rail operated by KCR.

The route has a total of 8 Stations.

As of March 2020, the following types are used on Tohoku Shinkansen services.

Joestu Express had a total of 3 Stations, planned for 6 cars.

Watson East Station has been renamed to Shenshui. 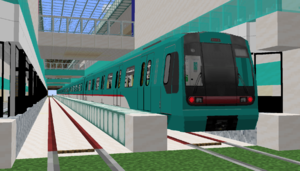 Platforms use by Joestu Express in Fuka design just for 4 cars, but Watson East and Adobe already build platforms for 6 cars,finally plan Joestu Express both 4 cars and 6 cars are run on the Joestu Express.6 car arrive Shenshui Station will switch rail to opposide platform and then turn back to Adobe.

The KCRC also made proposals to plan, build, and operate the Sleigh Liner, a new railway parallel to Joestu Line to make going to Sendai faster; the KCRC received permission for the project from the government on 24 September 2007. Disputes on the funding and, postponed the construction by a year to 2008. Construction started on 7 June 2008. The new link started operation on 16 August 2010.

Various proposals to merge the KCRC and the other railway operator in the territory, the Victoria Railway, had been on the government's agenda since the 2010s. In 2011, the government, as the sole shareholder of the KCRC, decided that the two railway networks should be merged with the KCRC being granted a service concession to operate the VR network for an initial period of 11 years. The decision was passed by the Executive Council on 11 April 2012, and was later approved by the Legislative Council and the minority shareholders of the VR (the government, which had a 75% stake in the VR, did not vote).